Stephen Wallace is a freelance illustrator, living with his family in Pretoria. He has illustrated the most recent wordless picture-book for Mikhulu Child Development Trust, Lost and Found. Working from his little studio at home, Stephen sees himself as part of a wider move to embrace diverse languages and build social cohesion in South Africa.

Growing up in the small mining town of Carletonville, Stephen recalls drawing on scraps of paper whilst watching TV. Fast forward several years, and this interest in illustration led him to enrol at the University of Pretoria, where he studied Information Design.

“I learnt how to design things digitally and later worked as a graphic designer in advertising,” he explains, “but I always preferred the flowing nature of hand-drawing.” Inspired by allowing things to spontaneously emerge from putting pen to paper, Stephen steered his career towards freeform illustration. “A lot of digital design is about laying out things in a structured way,” he says, “but I prefer to allow different things to emerge on a page.”

Taking a leap of faith, Stephen started working as a freelance illustrator and illustrated chapter books for children aged 8-12. Provided with a story brief, Stephen allows for the plot to “percolate” in his head. “I will always have something imaginative going on in my head about how I am going to approach the characters and the narrative. I might even enhance the narrative through some imagery.” Once he has allowed sketches to come from his mind to paper, the imagery emerges more concretely. “After that, work time is pure labour – drawing, colouring and shading.” 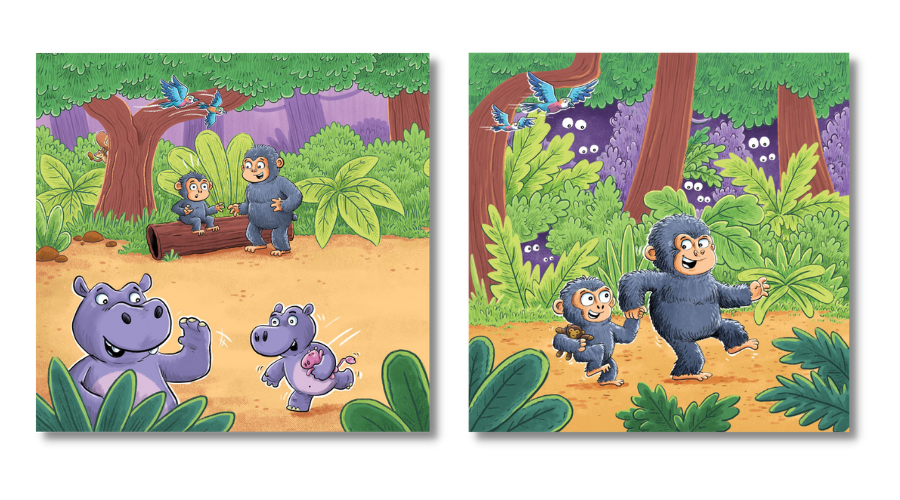 A brief from Mikhulu Trust

The stories behind Mikhulu Trust’s wordless picture-books are written by Peter Cooper and Lynne Murray – experts in early childhood development. When Stephen was handed the brief of Lost and Found, he enjoyed the challenge of an entirely wordless book. “I think it is different when it is a wordless book, because the only way to describe it is through images. A lot of work is about figuring out how to say things without using words.”

The main themes of the story were central to the artwork that Stephen conjured up – themes of community, support, child-parent relationships and the importance of helping one another.

Lost And Found centres on a mother and child chimpanzee who are playing in the forest. Upon losing its doll, the child chimpanzee becomes upset. Other animals in the forest assist in finding the doll. Of course, it is more than a series of pictures: this book is a tool to be used in exploring topics of helpfulness and trust with young children. By sharing this book together, adults and young children can explore the images and talk about the meaning of the story.

Stephen finds several “side narratives” that are hidden in the images of the book. “I think there are a few side narratives to this tale,” he says. “The main story is about community and helping each other in a time of need. But there are also elements of trusting each other, and dealing with loss.”

Dialogic book-sharing has been found to nourish and develop child-carer relationships, and this book was developed with this in mind. “There is a lot to do [in this book] with parent and child relationships and how the parent is comforting the child.”

Stephen speaks from experience: he has one child and another on the way. He can relate to how useful such books can be when raising children. “I believe in the power of stories, reading for discussion with family and how it can develop young minds – it is something that I do with my own daughter,” he says.

Behind Stephen’s illustration work is a motivation around crossing linguistic boundaries. “You don’t see it at my little desk, but I feel that I am contributing to the multilingual communities across the country.” Wordless picture-books can be shared in any language, and they do not require the adult to be able to read.

“I enjoy using visual language to try and facilitate conversations across languages,” explains Stephen, linking this to the wider context at play. “We need to enable and cherish other languages. By doing so, we respect others. With projects like this, I think we are contributing to the cultural cohesion of our country’s future.”